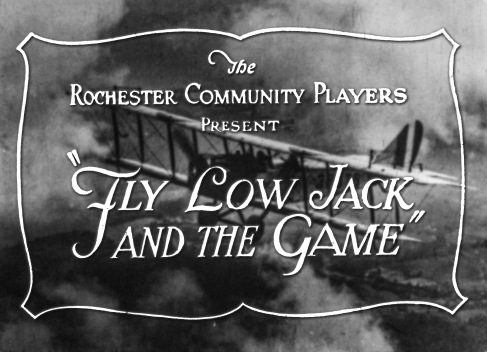 DeBergerac Productions is known for their work with production shoots and post-production editing, but another aspect of the company efforts is their work in film restorations. DeBergerac’s start in this area of film was inspired by what owner Mike Champlin called “a passion for silent-era motion pictures.” The company believes firmly that digital restoration for movies of the early-era of film making opens a window to the past that would otherwise be lost if these films were discarded or left to deterioration. 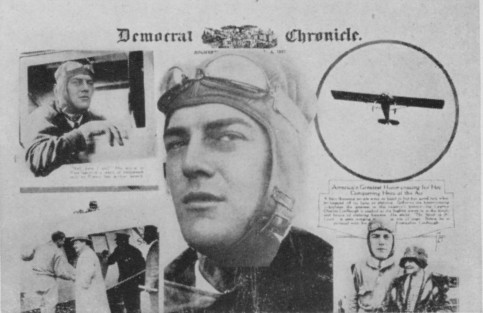 Fly Low Jack and the Game tells the story of a World War I aviator of the title’s namesake, nicknamed such for his low-diving attacks on enemy infantry. “Fly Low Jack” is also a play on the name of a popular card game of the times, “High Low Jack,” in essence a parody of the titles of Hollywood thrillers of the day. During the war, Jack and fellow pilot Kenneth share aspirations of partaking in a North Pole venture via flight once peacetime arrives. However, such a trip would require a hefty bankroll that could possibly be provided by Kenneth’s rich Uncle Oliver with some persuasion. 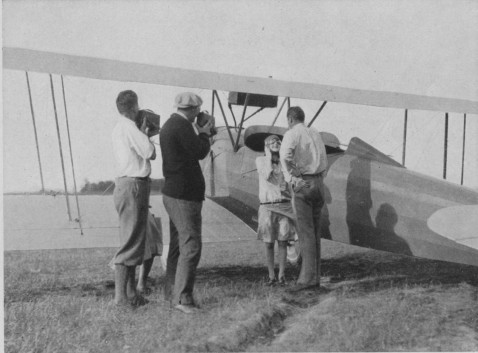 Behind the scenes of filming “Fly Low Jack”.

Post-war, Jack travels to visit Kenneth with hopes of this plan coming to fruition. Kenneth now resides with Uncle Oliver, along with his sister Elaine, whom Jack becomes smitten with against Uncle Oliver’s wishes. Uncle Oliver warns Jack to stay away from Elaine or there will be no flight, for he has “no use for a man who is not an athlete.” Wanting to prove his worth, Jack charades as an athlete, participating in tests of athletic endeavors put forth by Uncle Oliver. Hilarity ensues as each day of the visit features a different game and scenario of increasing difficulty as Kenneth aids in the pantomime. 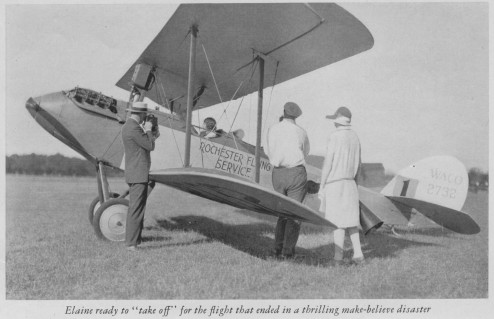 The film was made by the Rochester Community Players theatre production group, and was shot right here in Rochester, NY. The 30-minute romantic comedy silent film featured many Rochester locales, including Britton Field (on the site of the current Rochester International Airport), the polo grounds in South Park (the now Genesee Valley Park), the shores of Lake Ontario, and several houses of Rochester society people. Clearly, Rochester’s fingerprint is all over this movie, but what significance does “Fly Low Jack” have outside of our community? Why would Eastman Kodak take such an interest in a film made by amateurs? 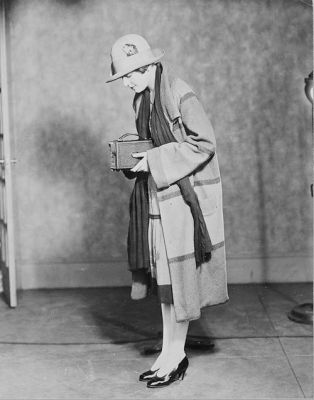 Kodak wanted to sell the idea that anyone could make a movie-just as easy as taking a snapshot. Kodak felt so strongly that the Rochester Community Players had made the whole project look so easy-and turned out so well, Kodak sent the film on a 125 city tour across the country. The Cine-Kodak Model B camera, which was used to make the film, was designed for amateur filmmaking in mind. 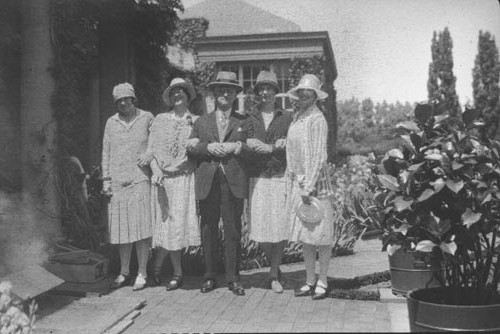 Marion was a frequent guest of George Eastman and was a member of his famous Lobster Quartet where she and three other prominent women would have lunch with him every Saturday while her husband would play the organ. Mrs. Gleason was chosen to direct the film to demonstrate the way ordinary people like her could make narrative film: “They wanted someone who knew absolutely nothing about movies so that they could be sure that anyone at all could load the camera”, she said in an interview about her experience. 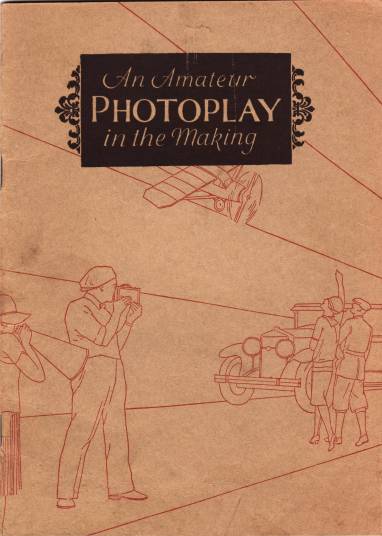 “The amateur producers…ran the gamut of the experiences and expedients associated in the public mind with professional producers,” -from An Amateur Photoplay in the Making, a pamphlet distributed by Eastman Kodak which chronicled the making of “Fly Low Jack”. The inner cover boasts an impressive list of facts for any production in any era of filmmaking. Not only was it filmed and acted by amateurs,

it was filmed in only three weeks, 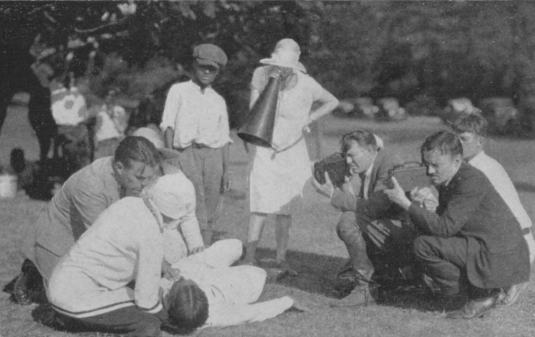 Profound, as well, was Marion Gleason’s direction of the talent that consisted of theatrical performers from the Rochester Community Players and the “Hollywood aesthetics” incorporated. The Community Players, being used to theater, had never dealt with such film features as close-ups or acting out of continuity.

After premiering at the Little Theater of the Memorial Art Gallery on October 20, 1927, and then Kilbourn Hall two days later, the movie became the centerpiece to a traveling roadshow assembled and promoted by Eastman Kodak. In addition to “Fly Low Jack’, those premiere showings also featured World War I films made by the Signal Corps. of the US Army and the US Navy. All of the films were accompanied by a soundtrack of carefully selected phonograph records played while the films were shown on a custom built dual turntable (made by Kodak). 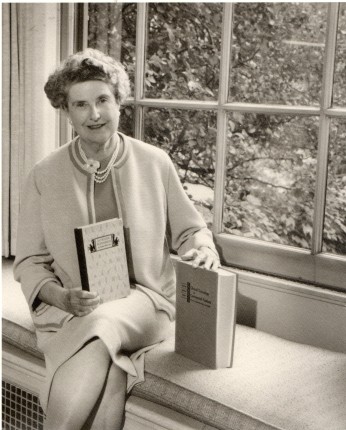 Marion Gleason with two of several books she wrote.

Despite the phenomenal traction the film gained, the Community Players would return to their theatrical roots and Gleason would focus on early development of what would become screenwriting.

Although DeBergerac has had the original films for many years, they had to wait until the technology became available to restore the fragile, shrunken film without damaging it. The original reels were in pretty rough shape, and all of them were suffering from severe acetate decomposition. The technology they were waiting for was a custom built digital optical printer which could scan each frame and advance it by hand.

Sadly, not all of the original film survived, however, in 2013 DeBergerac was able to purchase one of the release prints from the traveling show and was now able to replace the missing shots. Champlin explained, “This was without a doubt, a labor of love. This film was worth this extra effort to recreate the film exactly as it was shown in the traveling show”. The whole restoration process for “Fly Low Jack” has taken almost 12 years, and Mike was quick to point out: “Although the film itself has always been safely preserved in the George Eastman House film Archives, this was our opportunity to breathe new energy into Marion Gleason’s film using digital technology to make the audience’s experience as close as we can to what she first created in 1927-right down to the soundtrack”.

Fly Low Jack and the Game will be presented as part of the 2014 High Falls Film Festival on Saturday, October 25 at 11:45 a.m. at the Dryden Theatre. The festival celebrates achievements of women in film making. The screening will be followed by a question-and-answer panel which will include Jack Garner, retired Chief Critic for the Democrat & Chronicle, Mary Gleason, granddaughter of Marion Gleason, and Mike Champlin who will discuss the film and its digital restoration.

Rochester Community Players. An Amateur Photoplay in the Making.